Book Review: “All the Bright Places” by Jennifer Niven 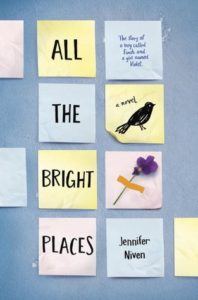 Theodore Finch is fascinated by death, and he constantly thinks of ways he might kill himself. But each time, something good, no matter how small, stops him.

Violet Markey lives for the future, counting the days until graduation, when she can escape her Indiana town and her aching grief in the wake of her sister’s recent death.

When Finch and Violet meet on the ledge of the bell tower at school, it’s unclear who saves whom. And when they pair up on a project to discover the “natural wonders” of their state, both Finch and Violet make more important discoveries: It’s only with Violet that Finch can be himself—a weird, funny, live-out-loud guy who’s not such a freak after all. And it’s only with Finch that Violet can forget to count away the days and start living them. But as Violet’s world grows, Finch’s begins to shrink.

This is an intense, gripping novel perfect for fans of Jay Asher, Rainbow Rowell, John Green, Gayle Forman, and Jenny Downham from a talented new voice in YA, Jennifer Niven.

For me, this novel was smart, clever, and poignant.

Smart: Reading this book was like hanging out with that quick-witted friend you go out of your way to socialize with because doing so makes you feel more intelligent     by association. And if I’m being totally honest, maybe even a little bit jealous of said person as well.

Clever: All right, can I just say that Finch is, hands down, one of my most favorite book characters EVER. His thoughts and speech are both quirky and oh so clever. I  found myself giggling and re-reading and even quoting him out loud to my poor, indulgent daughters. Yes, he is a tragic character, but I think we can all learn from the part of him that was able to accept himself for who he really was no matter the social consequences. He was authentic and raw. He was someone we’ve all known and possibly avoided.

Disclaimer: Spoilers lie (or is it lay?) ahead.

Poignant: Many parts of this story were so heartrending that I felt a physical prick in my chest as I read. Violet’s survivor’s guilt and subsequent fear of cars, and living in general, was painful to read. Even still, I appreciated the way the author paralleled her slow ascent from despair to Finch’s decent into darkness, and how each was able to help the other transition to where they each needed to go. Of course, I wished for Finch to find a way out of the darkness, but in the end he made his choice; and I try not to judge book characters too harshly.

Even though a novel is a work of fiction, the content shouldn’t suspend the reader’s imagination. In other words, everything that happens within the pages of a novel should be believable to the reader in the real world. There were many places in this book where as an adult I thought: That’s a stretch. For example: Finch decides to paint his red bedroom walls blue so he buys thirteen cans of paint. THIRTEEN! A couple of weeks ago I bought a gallon of touch-up paint. It cost me forty-one dollars. $41×13=$533. What seventeen year-old has that kind of cash lying around to blow on paint?

Disclaimer: The following is strictly my opinion.

Removing a key character too soon may cause readers to lose interest. The final chapters of this book reminded me of The Fault in Our Stars and I found myself equally frustrated, and thus skimming to the end. Sure, sometimes a main character dies or leaves, forcing the remaining character to pick up the broken pieces of that absence and rebuild a new normal. And I get that this process is all a part of the remaining character’s journey to growth and/or healing. But when two main characters have been closely tied to one other throughout the story—as in not loosely connected while traveling individual paths with alternate plots of their own—removing one too early leaves a big ‘ol hole in what remains of the novel.

I think I would have stayed more engrossed in Violet’s healing process had the author either summed up her grieving more quickly. Or, if the author had shown Violet following Finch’s final days through the clues he dropped in more of a one-step-behind manner, this would have allowed her to slowly heal while keeping him in the story until nearer the end. Thus eliminating the void his disappearance opened.

Final thoughts: All in all, I would recommend this book to anyone who is either a young adult or an adult who enjoys the occasional YA read. Up until the final chapters, I thoroughly enjoyed every minute I spent reading.