Book Review: “Lies and Other Acts of Love” by Kristy Wood Harvey 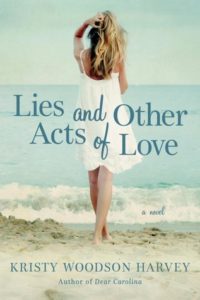 After sixty years of marriage and five daughters, Lynn “Lovey” White knows that all of us, from time to time, need to use our little white lies.

Her granddaughter, Annabelle, on the other hand, is as truthful as they come. She always does the right thing—that is, until she dumps her hedge fund manager fiancé and marries a musician she has known for three days. After all, her grandparents, who fell in love at first sight, have shared a lifetime of happiness, even through her grandfather’s declining health.

But when Annabelle’s world starts to collapse around her, she discovers that nothing about her picture-perfect family is as it seems. And Lovey has to decide whether one more lie will make or break the ones she loves . . .

If you’re a fan of Southern fiction and you relish novels dripping in southern isms, with characters who bring proper southern living to life, while highlighting the importance of forgiveness and strong family ties, you’ll probably love this book. The writing style was good. The voice was fine. The characters were vivid and well drawn. And while I also appreciated the way the author began each chapter with a piece of advice from a former generation, I only moderately enjoyed this story. Why? I guess it was because the plot was too predicable and could have been a smidge more compelling as well. Plus, a few technical issues kept pulling me from the story. There was an unexpected twist about three-quarters of the way through but it didn’t add enough intrigue to have me anxiously turning pages.

Nevertheless, when all was said and done, this story was sweet and romantic and fun.

Plot: Writers need to be careful when structuring a story to ensure that the plot will consistently move forward a good pace. Because both Annabelle and Lovey’s stories were mostly told in flashback mode, the plot inked along as if struggling against a stiff breeze. For most of the book it felt like I was stuck in a strange sort of limbo, where things were happening but there was no forward motion. I get that Lovey and Annabelle’s lives were being somewhat paralleled, and that Lovey must look back on her life to do so, but with so much of Annabelle’s present-day life being told in flashbacks as well, the combination caused the story to drag along.

Then there were also many places where I stopped and thought: wait, what just happened? It was like certain links in the plot chain had simply been removed. Like once the book was finished and edited there were too many words, and so someone—a senior editor most likely—went through and trimmed a bit. As with a person addicted to plastic surgery, so goes book editing. Too many nips here and tucks there, and suddenly things don’t quite line up anymore, don’t flow naturally.

Character Development: Though book characters are fictional they MUST have clear, believable, and real-life motivations. The men in this book were way to whooped for my taste and fawning all over Annabelle like pack of male dogs circling the only female on earth currently in heat. Don’t we women want a man with a little mystery? The hint of a chase in the very least?

Ben, in particular was a LOT too sappy. I know some women dream of hearing that kind of flattery, of having such an amorous man narrow his sights on her. But do we really, truly want that? REALLY? In my experience, any man who professes his love so freely and nauseatingly often is definitely up to something nefarious. Ahem!

Additionally, the lengths to which Holden was willing to go in order to win back Annabelle’s heart suspended the imagination. No man with any ounce of breeding and/or self-respect would ever make such a fool of himself, public or otherwise.

Then there was Priest Charming. He was okay but his general lack of character flaws made me suspicious. In fact, if I were to write a sequel to this book, I would reveal that Priest Charming is not Mister Perfect at all but a sociopathic serial killer. How’s that for a plot twist?

And what about Annabelle herself? Besides the fact that she was blonde and thin and a stylish dresser, I don’t understand why all three of these men were so enamored with her. She didn’t possess any quirky or redeeming personality traits, wasn’t particularly clever or amusing, nor did she commit any acts of heroism, like saving a family of baby ducks from a storm drain or any such thing. So what was her over reaching appeal? Are we to believe that all three of these men were really that shallow? And if so, that lack of depth should have made them all the less appealing to readers.

Grammar: The unnecessary use of adverbs can be a problem for many writers. Now, I’m not an adverb Nazi. On the contrary, I find adverbs vital to a well-written novel. When used properly, adverbs add beauty and flow. However, with regards to adverb use, writers need beware.

Warning: When constructing dialogue tags, authors should exercise extreme caution before inserting an adverb. Doing so needlessly might suggest laziness and/or a lack of ability on the part of the author.

Setting: Don’t hit the reader over the head with setting. The reader should feel as though she or he is immersed in the story, not sitting back as silent observer. I realize that southern fiction is a popular trend—I’ve even written a few myself—but I prefer to see the culture subtly woven into the story, speech and mannerisms of the characters rather than standing out from the story as it did in this book. At times it almost felt like I was reading a how-to manual on living in the south.

Personally, I don’t get the obsession with romanticizing the south at all. Don’t get me wrong, I’ve lived below the Mason Dixon Line for more than twenty-five years and I absolutely love it down here. But what most people don’t understand is that living in the southeast isn’t all garden parties and mimosas. There’s another side, a more prominent, less glamorous side, to living down here, which includes but is not limited to:

But then I suppose no one wants to read about any of that.