Book Review: “My Not So Perfect Life” by Sophie Kinsella 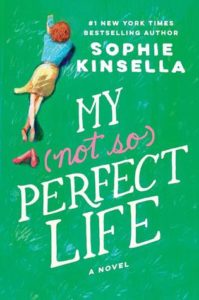 Katie Brenner has the perfect life: a flat in London, a glamorous job, and a super-cool Instagram feed.

Ok, so the real truth is that she rents a tiny room with no space for a wardrobe, has a hideous commute to a lowly admin job, and the life she shares on Instagram isn’t really hers.

But one day her dreams are bound to come true, aren’t they?

Until her not-so perfect life comes crashing down when her mega-successful boss Demeter gives her the sack. All Katie’s hopes are shattered. She has to move home to Somerset, where she helps her dad with his new glamping business.

Then Demeter and her family book in for a holiday, and Katie sees her chance. But should she get revenge on the woman who ruined her dreams? Or try to get her job back? Does Demeter – the woman with everything – have such an idyllic life herself? Maybe they have more in common than it seems.

And what’s wrong with not-so-perfect, anyway?

I’ve been a longtime fan of Sophie Kinsella. In fact, I’m pretty sure I’ve read every one of her novels. And though I enjoyed this book, as with much of her latest work, I felt like this one could have had a little more of what I call the “giggle factor.” In other words, the same level of amusement I came to expect from her earlier work. Even after all these years, I can still pick up one of her first novels—say, “The Undomestic Goddess”—and laugh out loud while reading. Even so, I really liked this story. It was light, but well thought out and with a much-needed message regarding social media that hummed along to the tune of “A-person’s-life-doesn’t-have-to-be-perfect-to-be-good.” A must-read for all those who often find themselves scanning through Facebook or Instagram and thinking: “Compared to others, my life sucks!”

Characterization: A book character’s motivations and personality traits should always line up with her or his actions. People don’t do things “just because”.

Katie-Cat was a fun and evolving character, one I rooted for wholeheartedly throughout the story. Her actions lined up perfectly with her age and insecurities as a country-girl-come-to-the-big-city. But she also kept me guessing. I wasn’t sure up until the very end whether she would choose to go back to the city or stay in the country.

Alex too was an interesting character, a successful man who had been raised with privilege and what appeared to be every advantage, yet his upbringing turned out to be more of a hindrance than a leg-up. He was smart and sexy, with a touch of vulnerability that made him entirely endearing.

Instead of simply describing the physical attraction between these two characters, Kinsella did a great job of slowly developing their romance and showing the reader how and why their differing pasts actually gave them a lot in common and allowed them to fall in love.

Then there was Demeter. With her perfect career, family, hair and clothes, she was essentially everything Katie had always dreamed of becoming. I loved her and how her scattered creativity caused her futile efforts at being in charge to backfire on her. (Full disclosure: I think she’s my spirit animal.) I also liked the way Kinsella made us hate her at first before turning the table by making her our ally.

And we can’t forget about Mick and Biddy. They were quirky and lovable, the glue that held this story together and made it work.

Pacing: As writers, we often have so many great ideas for our stories that we have a hard time deciding what to keep and what to cut. And who could blame us? Once we’ve worked hard on a scene and it’s brilliant, it’s much too disheartening to let it go. Nevertheless, we should be careful to include only the material that is vital to the plot. Otherwise, the story will drag as readers ask themselves: “Is this scene necessary to the story?”, which may well lead them to start skimming.

Parts of this story dragged for me. Because some of the scenes seemed to be conveying similar information, it felt to me as though they could have been combined and/or deleted. Especially toward the end, where the author took a few too many chapters to sum up the story and let the reader know what would become of Katie and Alex.

Punctuation: Exclamation points are a great way to show excitement or anger, but they should be used sparingly. I’ve even heard editors caution to use only one exclamation point per chapter, certainly only one per page. Otherwise, it appears as though the characters are at a constant state of heightened emotion, which either becomes exhausting to the reader and/or causes the exclamation point to lose its oomph.

In this novel, Kinsella went a little crazy with the exclamation points, sometimes using up to five on a single page.

Descriptives: Authors should take care not to repeat descriptive words or phrases over and over again. The longer the book, the harder it gets to come up with ways of showing similar expressions and physical displays of emotion. But paying attention to how often we recycle the same descriptions is essential to crafting a creative and well-written novel.

Here, the author reused many words, like wry and twinkle, throughout the entire book and sometimes within pages of each other.

Overall, this novel may not have been as funny as some of Kinsella’s others, but it was an extremely entertaining read.